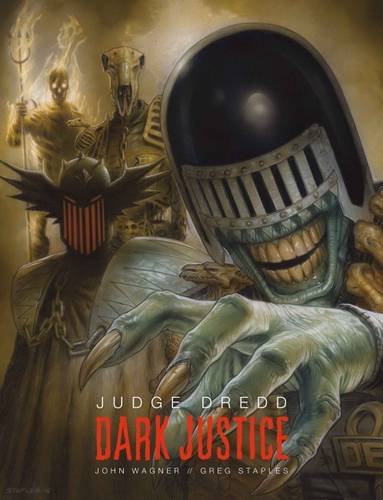 After a ten year absence, the life-hating super-fiend from Deadworld -Judge Death - returns! Having previously been destroyed by nuclear fire and dragged to hell by the vengeful spirits of those he had murdered, Death has managed to return to world, ready to resume his mission in destroying all life. On his own, Death is a devastating force of evil, but once united with his 'brothers' - Judges Fear, Fire and Mortis - the quartet of terror are near invincible! Can Judge Dredd and Psi-Judge Anderson possibly stop the Dark Judges from attempting to destroy Mega-City One again?


John Wagner is the co-creator of Judge Dredd, Strontium Dog, Ace Trucking Co. and Button Man, amongst many others, for 2000AD.

Greg Staples is famous for the fully painted art of Slaine. From December 2014 his magnum opus, Dark Justice, appears in 2000AD in advance of the graphic novel to be published in May 2014.